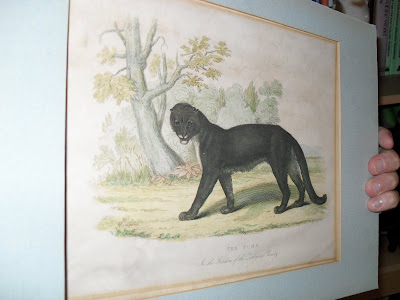 A couple of years ago now, good friend, zoologist and all round great researcher Dr Karl Shuker, discovered a strange and intriguing antique print in a bookshop at Hay-on-Wye. He wrote of his find in one of the Centre for Fortean Zoology Yearbooks because the painting showed what was labelled as a ‘puma’ from the Zoological Gardens of London. “So, what’s so mysterious about a puma in a zoo?” I hear you ask. Well, the puma in the print is actually melanistic! For many years debate has raged as to whether ‘black’ pumas actually exist in the wild, but evidence is pretty non-existent. Most specimens purported to be melanistic have been dark brown, but nowhere near as dark as melanistic leopards.

In the there are many folk who believe melanistic pumas exist in our woods – this is nigh on impossible. There is no evidence whatsoever to suggest that pumas of melanistic pelage exist, but there is a possibility that one such specimen was held at London Zoo. Dr Shuker had certainly made a great discovery when he stumbled across the antique print, and it seems that the painting is almost as rare as the cats themselves. And yet on Sunday 2nd September, whilst browsing in a local shop in my home , I was amazed to see the exact same ‘black puma’ print glaring down at me from the wall. The shop, full of bric-a-brac was the last place I’d expected to find such a picture and yet there it was, in a cheap gold coloured frame. I plucked it from the wall and asked the man behind the counter how much he wanted for it, and to my amazement he replied, “Just a couple of quid!”

I whisked £3 out of my pocket and came out of the shop excited at my find, wondering just how rare this image was. The painting in glorious colour, shows exactly how a melanistic puma would look, with its slate grey underside and dark, almost deep charcoal, coat.

In my recent book Mystery Animals of the British Isles: London I looked at many strange animals that were housed at London Zoo over the years, from a white puma, to some now sadly extinct species, but a black puma is such a mysterious creature. I’ve seen a couple of photographs of alleged melanistic pumas in zoo parks, and although dark brown they don’t have the look of the cat in this painting. So, maybe a rare specimen had turned up in the Zoological Gardens and I’m guessing it was painted rather accurately, unless of course the animal hadn’t been a melanistic puma but possibly another cat such as the golden cat. Even so, whilst the rare painting, and the rare cat it shows, is a mystery, it does not - of course - mean we have black pumas roaming the . The recent Essex lion farce made a mockery of any decent research and like most ‘big cat’ stories it snowballed out of control; the problem being too many inconsistent reports of impossible cats, and the recent lion tale – albeit a headline maker – was nothing new. I’d hate to think how many newspapers and ‘researchers’ have, over the years, taken to the woods in search of tigers, lions, giant mutant cats and black pumas.

There is no reason whatsoever for black pumas to exist in the UK woodlands, or lions, tigers and cheetahs, and yet somehow these animals continuously crop up in the headlines and then of course, those who get sucked in by the headlines begin to scoff at all other exotic cat reports.

Only recently the Croydon Advertiser quoted me as saying there were “pumas and cougars” roaming the woods of , and then there are those who speak about leopard and puma hybrids, without a shred of evidence. And then there are the black puma reports. Whilst the painting of the ‘black puma’ is of great mystery, I don’t think there’s any reason to start believing that black pumas roam the UK, or those somehow elusive lions and tigers, which - in reality - would stick out like a sore thumb, hunt large prey and would easily be recaptured/shot dead, if they happened to leap from a passing circus or inadequate zoo cage.

A real mystery is the ‘puma’ painting, and this type of find instils in me a sense of excitement that even in today’s commercial and dire shopping experience, there are still a few shops out there that harbour a few mysteries, but whether the woods of our country do, is a debate that will rage whatever evidence is unearthed.