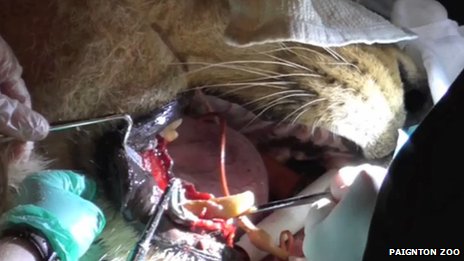 An Asiatic lion at a Devon zoo has had two teeth removed by a dentist who normally treats humans.
Indu had a canine and pre-molar extracted by Dr Peter Kertesz at Paignton Zoo.
The dentist, who has a surgery in London, has worked with pandas, whales and gorillas.

A zoo spokesman said it was believed the female lion had chipped her teeth while biting on something hard and that she was recovering well. 'Serious business' An adult Asiatic lion weighs about 20 stone (130 kg) and has up to 30 teeth, including canines that can be many inches in length, a zoo spokesman added.

Dr Kertesz said: "Animals or people, it's all the same - they need treatment, they get treatment. The scale and the location is what varies. "People ask if this is just a bit of fun, but it is a very serious business. The health and sometimes the life of a rare creature is in your hands.

Email ThisBlogThis!Share to TwitterShare to FacebookShare to Pinterest
Labels: newslink