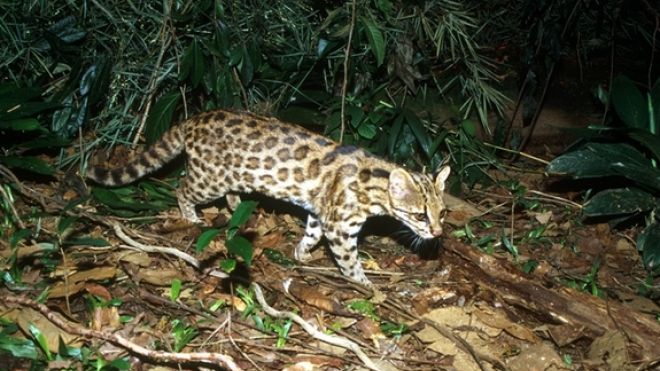 Hybridization among animal species has recently become more recognized as an important phenomenon, especially in the context of recent radiations. Here we show that complex hybridization has led to contrasting patterns of genomic composition among closely related species of the Neotropical cat genus Leopardus. We show strong evidence of ancient hybridization and introgression between the pampas cat (L. colocolo) and northeastern populations of tigrina (L. tigrinus), leading to remarkable cytonuclear discordance in the latter. In contrast, southern tigrina populations show recent and continuing hybridization with Geoffroy’s cat (L. geoffroyi), leading to extreme levels of interspecific admixture at their contact zone. Finally, we demonstrate that two seemingly continuous Brazilian tigrina populations show no evidence of ongoing gene flow between them, leading us to support their formal recognition as distinct species, namely L. tigrinus in the northeast and L. guttulus in the south. Current Biology

News of new felid species in South America appears to be finally coming to the fore. Rumors of a new type of jaguar and other new cats may be in the wings, but, today, it was announced progress has been made in observations of a new smaller spotted cat.n summary, genetic biologists have discovered that the two populations of tigrina previously thought to be one species do not, in fact, interbreed and thus are distinct, according to results published today in Current Biology.

“So much is still unknown about the natural world, even in groups that are supposed to be well-characterized, such as cats. In fact, there are many basic aspects that we still don’t know about wild cats, from their precise geographic distribution and their diets,” said the study’s lead author, Eduardo Eizirik of Pontifícia Universidade Católica do Rio Grande do Sul in Brazil.
Eizirik’s results have implications for conservation efforts—particularly laws about poaching and the designation of national parkland. Such measures are often focused on individual species.
Recognizing the northeastern tigrina as distinct means that biologists will have to assess its conservation status and determine what steps need to be taken so that both species of tigrina can be adequately protected…

Eizirik and colleagues obtained DNA samples from a total of 216 different Leopardus cats across their ranges. Analysis of the DNA sequences found in the mitochondria, the cell’s power plant, revealed ancient interbreeding between the Pampas cat and the northeastern tigrina.
Since an individual only inherits mitochondrial DNA from its mother, researchers could peer into the ancient history of these two felines, and found that they mated together frequently before the two cats split into separate species.
Although the Geoffroy’s cat and the southern tigrina divided into separate species over a million years ago, they began to mate together in the more recent past in the areas of southern Brazil and Bolivia where their habitats overlap. While the two cats interbreed regularly at this contact zone, the mating doesn’t extend to farther areas and the two species remain distinct….
When Eizirik and colleagues analyzed the genetics of the two different tigrina populations, however, they were surprised to learn that genes did not appear to be moving between the northeastern and southern tigrinas.
“This observation implies that these tigrina populations are not interbreeding, which led us to recognize them as distinct species,” Eizirik says. The researchers have suggested that the northeastern tigrina retain its current name of L. tigrinus, while dubbing the southern tigrina L. guttulus.
“Very little was—and still is—known about this species,” says Eizirik. “There have been some initial studies on its diet, but still most of its basic biology remains poorly known, including density, habitat use, and population trends.” Nat Geo.
Posted by Ghostman at 14:17

Email ThisBlogThis!Share to TwitterShare to FacebookShare to Pinterest
Labels: newslink